Send the jackpots soaring with the Eagles Wings mobile poker machine from Microgaming. You can win jackpots as high as 375,000 and win as many as 60 free games with three scatters. 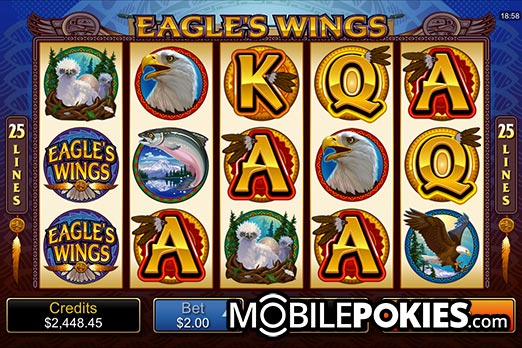 Eagle's Wings is a mobile pokie game with an American Indian theme that features free games as well as grouped wild symbols on every reel. Hit the feature and you get tripled wins and the chance to win up to 375,000 credits.

Like most pokie games you want to see as many wilds on the screen as possible. The wilds on this game appear in groups so you can get a full screen of wild Eagles Wings emblems paying up to 125,000 credits during regular play.

Keep a lookout for the Lucky Eagle Coins as these are your feature symbols. Getting at least three in any position triggers the Lucky Eagle free games where you pick one coin to reveal between 5 and 60 free games.

When on the feature all wins are paid at triple the usual value which increases the highest jackpot to 3750,000 credits. The feature can be won again on the feature which awards the same amount of free games as your initial pick.

Play at these sites